“I would recommend this program to anyone who’s in the military and trying to make that transition, especially into an executive position. It’s almost required reading, so to speak, to learn the language, and I think their career paths will have a much steeper trajectory upward having done this.” 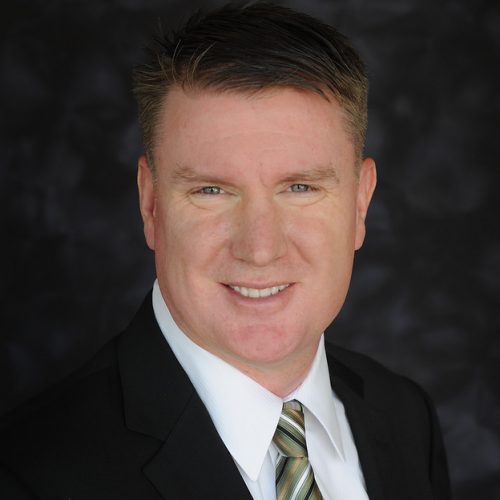 Retired U.S. Navy Commander Shane Sullivan has always been willing to put in the work to achieve his goals. That work has yielded great dividends.

He began his naval service as a pilot operating the P-3 Orion, a large maritime patrol aircraft. Pursuing his childhood dream of flying off an aircraft carrier, Sullivan was eventually selected for an F-18 transition.

After Sullivan turned his focus to a different sort of flying, he was offered a unique opportunity that helped showcase his innate ability to lead.

“I got picked up to go to the Marine Corps Weapons School (MAWTS-1), which is very unusual for a Navy fighter pilot to do,” Sullivan said.

“I excelled there, and they asked me to come back as an instructor. I was the first ever to do that,” he continued. “Then I got picked up for command of a Super Hornet squadron, which no P-3 transition pilot had ever done before.”

A Degree to Address the Blind Spots of Business

When Sullivan retired from the Navy after 20 years of service, his reputation as a leader helped him land a corporate job. He joined seaplane manufacturer ICON Aircraft in Vacaville, California, in 2016.

“I started in a manager position but very quickly worked my way up into the executive position,” he said. “From there, I was able to springboard into the position I’m in right now.”

In 2017, Sullivan was recruited to serve as the general manager of Aero-Flite, an aviation company in Spokane, Washington, that contracts with the U.S. Forest Service and other government agencies to help fight wildfires using air tankers.

While he understood how to run operations in management and leadership, he realized he lacked some of the formal training that would help him perform to the best of his ability.

“I felt I was missing some elements in my background. Mainly business acumen—understanding some of the financials that you just don’t do in the military,” Sullivan said. “I understood how to run operations in management and leadership, but those other elements I didn’t have formal training on. That was one of the reasons I elected to go back and get the degree.”

“Washington State University had the best online reputation as well as the program I felt would best suit my needs.”

When researching executive MBA programs, the flexible nature of WSU’s 100% online coursework was a key differentiator. Sullivan needed a school that would help ease the balancing act of earning a degree while working full time and being a dad to two young girls.

“I did look around at some other schools, but most required some kind of residency, and that made it too challenging,” he said.

Sullivan credits the curriculum of the Executive MBA program with helping him become a more well-rounded leader.

“Washington State University’s degree helped me fill in some of those missing spots that I knew I had,” he explained. “At least I was aware I had blind spots, but I’m better equipped now to limit what those are.”

After completing his first EMBA course online, Sullivan’s decision to join WSU was further validated when he chose to attend the Carson College of Business’s annual EMBA Leadership Conference in Seattle. The exclusive three-day event allowed him to connect with both current and former Cougs.

“The Executive MBA Conference was a very good complement to the program. To be able to meet your colleagues and future colleagues and break bread with them is really important,” Sullivan said.

“It adds some of these soft skills that can help make you marketable in the workspace,” he continued. “I’ve encouraged other students to attend the conference should they get the opportunity, because I definitely have found value in it.”

“There’s a wide range of students in the Executive MBA. The spectrum was larger than I would have expected.”

Sullivan found it helpful to ask questions of his peers as well as alumni, and their answers gave him a real sense of the program’s workload and what he could expect in upcoming courses.

“I was quickly able to formulate student networks with colleagues who were already in the program,” Sullivan said.

Becoming Fluent in the Language of Business

“The entire Executive MBA program was able to provide me those skills to speak the language of business. The military has its own language, and there are a lot of parallels between the two, but WSU provided the Rosetta Stone, the Rolodex, of translation points,” he said.

Four Letters That Can Help Improve Your Standing

Sullivan recognizes that potential military students might feel uneasy about starting something new after years of service.

“It’s a bit of a scary plunge departing something that you’ve been doing for 20-plus years,” he said.

Although it takes more than an advanced degree to achieve success as an executive, Sullivan acknowledges that sometimes just having the letters EMBA after your name can make all the difference.

“When you engage with other people in business, the MBA gives you some credibility that you wouldn’t have otherwise.”