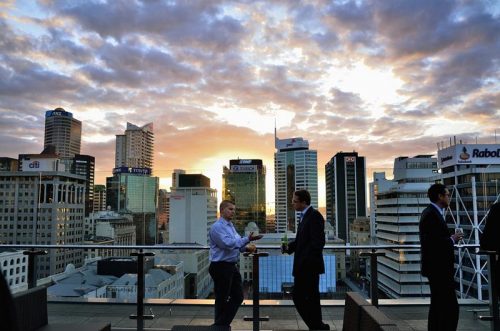 Making and leveraging connections can help you build partnerships for your business, advance your leadership skills, or even increase your chances of finding your next employment opportunity. As you work toward your executive MBA degree, it’s important that you practice and understand the fundamentals of networking, one of the cornerstones of executive success.

However, the nature of business networking evolves as technology changes and the way we communicate with one another shifts. This year will see four key trends shape the way C-suite executives and business leaders maintain and grow their professional networks:

1. Increasing Use of Networking Apps

Those who have reached the C-suite know how important networking is; indeed, one study demonstrated that half of career success can be attributed to your professional network. The best way to cultivate your network and connect with other leaders in your industry changes and evolves over time. Thus, one of the biggest networking trends in 2017 will be the continued growth of the use of apps and online services in forging business connections.

New apps emerge all the time with features designed to facilitate easier and more effective networking. For example, for those professionals who use Gmail, the app Rapportive works with the email service to function as a form of social CRM. This app will connect with your LinkedIn account to pull up data such as job title, company name and profile pictures for the contacts you are corresponding with, helping you to quickly tailor your email responses.

A number of innovative apps seek to apply the same interface and concept behind popular dating apps to the world of business networking. One such service is Shapr, a startup based in New York that draws upon your existing network in order to help you find new connections. Because both sides have to approve before any information is exchanged, Shapr helps protect C-suite executives from unwanted solicitations. Another similar app is CityHour; the highlight of this service is that it will connect you with other professionals in your industry who are nearby and looking to meet within a couple of hours. For executives stuck between meetings in an unfamiliar city, CityHour can help ease the process of forging new and unexpected connections.

Much like specialized apps aimed at facilitating business connections, the broader realm of social networking will continue to expand its role in professional networking in 2017. Certainly, LinkedIn is the most popular of all social networks for business professionals, and its dominance is unlikely to change in the coming year. LinkedIn kicked off 2017 with a major website redesign, in addition to making the website and its mobile version more aesthetically pleasing, this overhaul was aimed at increasing the ease of communication between members, and making networking conversations a centerpiece of the site’s purpose.

For example, LinkedIn has introduced a real-time messaging feature to allow users to start conversations with their connections from anywhere on the site. LinkedIn is also looking to spur more conversations by adding prompts to the homepage that encourage users to congratulate those in their network on a new job or other achievement. Another valuable feature is available for those who create content on LinkedIn in an effort to expand their business network: The service will begin providing information such as company and job title for everyone who reads a LinkedIn post. All together, these new features will help LinkedIn stay at the core of all executives’ networking activities in the year ahead.

3. Returning Emphasis on the Personal Touch

Because so much networking happens through various apps and online platforms such as the aforementioned, it is easy for networking efforts to become impersonal and rote. Such detached and remote networking can lead to weaker connections that are difficult to draw upon when needed. In response, a level of personal connection and individualized touches will become more important for networking executives this year.

One of the easiest ways to make a strong and memorable impression with another executive that you meet in passing at an event or conference is to send a short, but personal, handwritten note. Even if you don’t receive an immediate and direct response, this small amount of effort can help leave a big impression. If a note seems too personal for a particular contact, a phone call can help strike the right balance between snail mail and e-mail communication. In short, while there is a major trend in 2017 toward an increasing reliance on technological innovations for executive networking, businesspeople at all levels will seek to balance this out with small personal touches.

The importance of personal connections in doing business at the executive level has made networking invaluable for success at the top. Increasingly, networking platforms aimed specifically at C-suite executives are emerging. One such platform — the aptly named C-Suite Network — is making great efforts to increase its importance for executives looking to expand their networks in 2017. In the last quarter of 2016, C-Suite Network acquired Hero Club, a similar networking group focused on entrepreneurial founders and CEOs. In doing so, C-Suite Network expanded its user base to almost half of a million C-suite executives.

The platform hosts multiple events and conferences each year, supporting these key in-person networking avenues with other complementary offerings such as broadcast programming, a book club and radio programs. For executives looking to expand their in-person networking reach with other professionals at the same level, joining one of these fast-growing executive networking platforms such as C-Suite Network can help provide an easy pathway to meeting other leaders in your industry.

Effective networking can provide you with a significant boost to advance your career. For those who are established in their career and are looking to take the next step, an executive MBA online degree from Washington State University can help you go even further. Our program aims to do more than the traditional MBA program by empowering those who are already leaders within their industry to expand their networks and prepare themselves for the C-suite. If you are interested in learning more about our curriculum, please contact us today to receive our free brochure.