“There’s something about going back to school and pushing yourself to grow your knowledge base that sends you from being where you are now to where you want to be.” 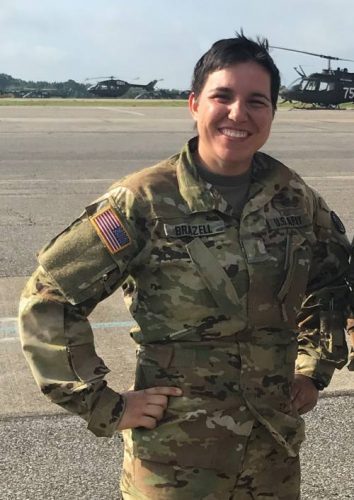 If you told Taler Brazell back in high school that she was going to join the military, she probably wouldn’t have believed you. Now she flies Black Hawks as a pilot in the U.S. Army.

A star student athlete, Brazell was approached by several college tennis scouts, including one from West Point. She ended up visiting the campus and fell in love.

“I like to push myself to work hard, form bonds, and really care for people,” she said. “That’s what I saw at West Point. The bonus of being able to serve my country was cool, because I was always big into community service. It was a perfect fit.”

Brazell hasn’t slowed down since graduating from West Point in 2017. After attending officer school at Fort Sam Houston in Texas, she headed straight to Alabama for flight school at Fort Rucker, where she officially became a helicopter pilot. She then jumped into a new role as section leader for the medevac unit at Fort Riley in Kansas.

It was when Brazell was getting ready to head to Romania for a series of medevac field exercises with her regiment that she decided to apply for graduate school.

“After flight school, I felt like I needed to push myself and grow in a different way. Especially being junior in my position, I saw the MBA as a route to continue learning as a leader and a student.”

Although she was about to be out of the country fora few months, she wasn’t going to let the logistics prevent her from attaining her goal.

“I thought, ‘Maybe I should just wait until I get more settled.’ But at the end of the day I was like, ‘You know what? That is probably never going to happen, and we’ll just make it work and find a way.’”

She spent a month researching accredited MBA programs that would fit her schedule and lifestyle as an active-duty pilot—and that would allow her to enroll quickly without having to navigate a cumbersome admissions process. 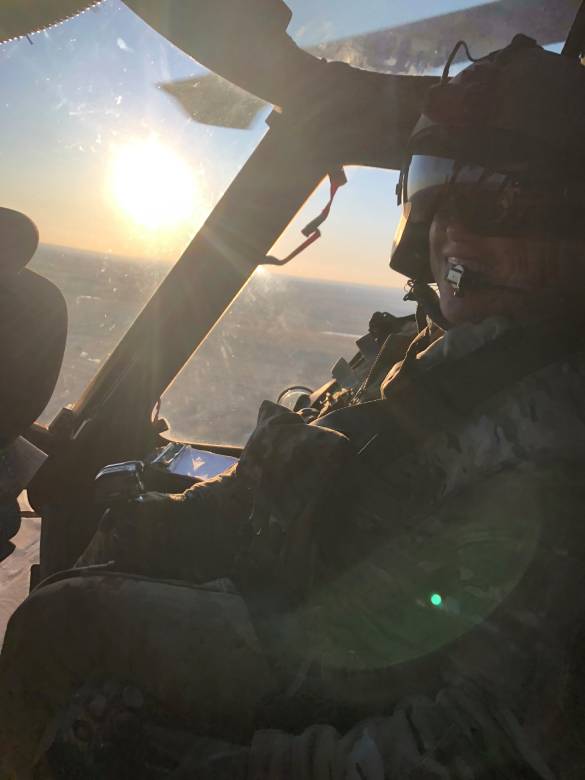 “I looked at a large pool of schools, and WSU had everything I was looking for. The combination of being able to start right away and the fact that they are very military friendly was the ultimate reason I chose WSU.”

An Education That Meets You Where You Are

While Brazell was training in Romania, she was working with a ten-hour time difference between her and her professors in the Pacific Northwest. This is where WSU’s asynchronous learning opportunities for online students became pivotal for her.

“A lot of the lectures happened at 2 a.m. where I was, so I was fortunate most of them were recorded,” she said.

She also realized that the military friendliness touted on the WSU website wasn’t just lip service—it quickly became evident anytime she needed help with deadlines or getting early access to her course materials so she could work ahead.

“That was one of the keys I saw from the beginning. My professors would respond quickly and understood the situation and were very accommodating, especially with the time-zone difference and never knowing if you had good internet.”

“They’ll give me the schedule early or give me tips on how to get online resources. That’s one of the great things I learned about WSU compared to other colleges: they’re really accommodating to different schedules and understanding of certain situations.”

Cougar Pride Has No Boundaries

Thanks to some assistance from her military support network at WSU, Brazell has been able to take a little bit of Coug spirit with her everywhere she goes.

“My student advisor directed me to [Veteran Affairs Manager] Matt Beer. We talked on the phone a little bit, and he sent a WSU flag. I take the flag with me and try to take pictures with it and send it back to him,” she said.

Maintaining an open dialogue with Beer has been especially helpful when Brazell is dealing with the challenges of being on active duty that only a former service member could relate to.

“It’s nice to have somebody who’s been in your shoes
and can understand what you’re going through.
Having somebody who has that same experience
is really reassuring.”

Brazell’s busy schedule hasn’t stopped her from forming friendships with many of her peers as well. With one classmate in particular, it turned out that a group project wasn’t the only thing they had in common.

“We read each other’s bio, and I discovered we’re both from Vegas. And then we discovered we’re both in the Army. They always say the Army is such a small world, but to go into school and both be getting an MBA, it was crazy,” she said. “It’s been a unique experience, and I’ve met many classmates who I’m still friends with.”

Brazell has been able to get together with some of her fellow Cougs when she’s home on break and hopes to continue these meetups in the future. 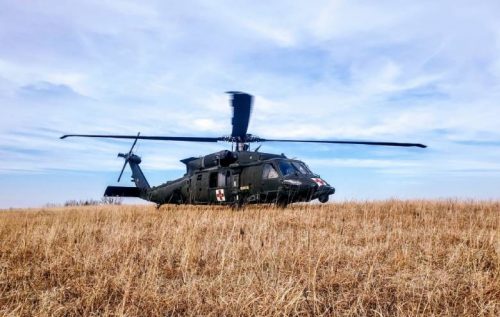 Earning a Degree with Real-World Applications

Brazell has quickly realized that the benefits of obtaining an MBA from WSU transcend conventional business knowledge.

Still, the courses she’s taken in the Online MBA program have equipped her with a specific knowledge base that she’s draws on in her daily responsibilities as an Army officer.

“It’s very applicable to the Army—making programs and scheduling and just trying to incorporate that. I’ve seen a lot of parallels that I never realized, and I try to apply them as best as I can. Because [leading in] the Army and running a business are very similar.”

After her military service, Brazell plans to combine her new degree with her passion for community service to develop her own nonprofit that connects soldiers with shelter animals.

She encourages anyone who’s thought about getting their MBA to avoid the temptation to procrastinate, especially when it comes to something as important as your education.

“Don’t wait. I know it seems like you have a lot on your plate now, but that just grows as you get more into leadership or more into your job, and there’s never going to be a perfect time. There’s a lot of hesitation that’ll hold you back; just have confidence and leap in.”