Even before Mike Gump became a WSU student, the university held a special place in his heart. “I grew up in eastern Washington, North Idaho. The first football game I can ever remember watching was the Apple Cup in 1992 — the famous Bledsoe to Bobo pass with a bunch of snow on the ground,” Mike recalls. “From that point on, I became a fan of WSU football and I always had a desire to attend the university. I had always thought to myself that it was an honor to be called a Coug.” 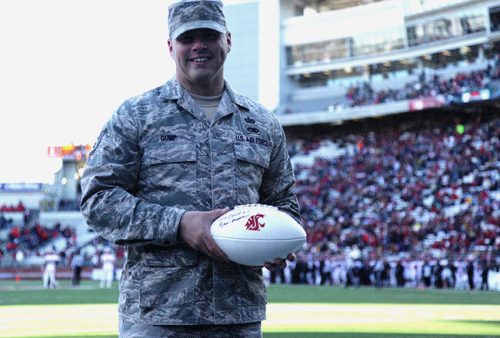 So when Mike decided to pursue his MBA, Washington State University was the natural choice. An active member of the military, Mike was stationed at Dover Air Force Base in Delaware at the time, so the online MBA was a perfect fit.

In 2013, Mike was deployed to Kyrgyzstan for active duty. He was directly responsible for the oversight of 4,000 Air Force and Department of Defense civilian requirements valued at $224 million. But those responsibilities didn’t stop Mike from working toward his degree. If anything, he was motivated by the challenge.

“It was very rewarding earning my degree while serving in the military. It was definitely challenging, but gratifying when I completed my degree. I got really good with my time management strategies. I had professors who understood what I was doing and they were fully supportive in every facet possible. The resources that are available to all students definitely eased the difficulty of challenges that come from time zone differences.”

Click here to learn about WSU’s commitment to providing educational opportunities for military personnel and veterans.

As he worked his way through the program, Mike found the subject matter useful in his military duties. “I was able to immediately apply my coursework in my military career,” Mike said. “Many of the courses directly correlated with my career as a manpower analyst when I was active duty. I was able to take many of the leadership aspects of the MBA program and apply them in day-to-day military operations.”

Mike’s Carson College of Business education has also proved to be quite valuable in the business world. “My MBA set me apart from the other applicants,” he said. “It shows hiring managers that I have long-term goals and aspirations, and that I have the ability to reach and complete those goals.”

Today, Mike is a business analyst with Avista Utilities. He is quick to point out the extensive reach of the WSU alumni family. “The Cougar network is vast and almost anywhere you go, you can find a fellow Coug. All the way from corporate execs down to my fellow employees, there is a Washington State alumni around,” he says.