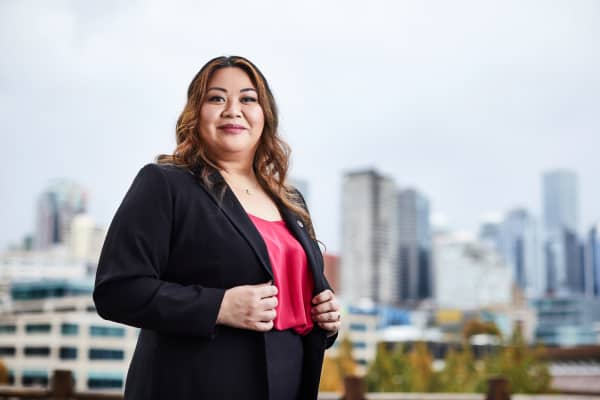 Early in her career, Hazelmae Overturf received some criticism: “Your optimism and positivity may come across as immature and disingenuous.” This gave her the impression that her authentic mannerisms, cheery disposition, and hopeful nature would hold her back—that these qualities would be perceived as unprofessional.

While she was taken aback, Hazelmae still believed that the personal qualities she was being encouraged to tone down were great tools for relating to—and connecting with—customers. Having worked at a credit union in Washington for more than 12 years, she knew the type of service her clients expected. But this criticism did creep into her mind.

“You get the voices in your head from those conversations over time—I call them limiting thoughts. But you must believe in yourself, your power to overcome and recognize the work you’ve put in to get to this point.”

As Hazelmae rose through the ranks at the credit union, some people didn’t see her growth as deserved or earned. Subtle, and not so subtle, resentments began bubbling up from a few team members. One teammate in particular, a man older than Hazelmae, took a passive-aggressive route by questioning her competency during meetings and presentations.

“In my career, I’ve have had several leadership roles where I was probably the youngest person on the team,” she says. “Having worked alongside people and then becoming their boss created challenges. One gentleman seemed uncomfortable with me, a younger woman, leading an area that he considered his expertise. During presentations he would frequently stop, look at me, and ask, ‘Do you understand?’ Which I interpreted as an attempt to knock me down a bit in front of the rest of the team.”

Instead of admonishing her colleague or becoming confrontational, Hazelmae chose a more diplomatic approach. She worked to understand his behavior and needs. She then gave him a platform to grow and share his knowledge with the team.

“I made it very clear, I am here as your leader and the leader of this team, but we work together collectively, and our job is to shine—to be our best together.”

“I continue to surround myself with people who continue to help build me up, who amplify my voice, and whom I can share mutual respect and gratitude with.”

When Hazelmae decided to pursue her Executive MBA, she wanted a program with a strong reputation and flexible online format. After reviewing her options, she chose Washington State University, and she entered the program ready to take her career to the next level. While attending Washington State for her Executive MBA Online, Hazelmae made valuable connections with fellow students.

“It’s amazing how you can build relationships with folks based off little Zoom squares, right? But it was pretty easy. One classmate in particular would chat me during Zoom calls and say things like, ‘What do you think about this, Hazelmae?’ We would have side conversations and he would encourage me to share my thoughts and opinions with the class. Those little pushes made me a stronger student and reinforced my confidence.”

With hard work and determination, Hazelmae has held several leadership positions including her current role as Product Owner in Employee Experience—a new role that bridges human resources and technology. In October of 2021, she was named “2021 Young Credit Union Leader of the Year,” and she has no intention of slowing down. She attributes this honor to her work ethic and the people who have supported her and pushed her to be her best.

“My experience at WSU enabled me to solidify my professional goals and gave me the confidence to jump into a new field. The IT Leadership and Innovation classes provided the knowledge and skills necessary to thrive in my new role. Most importantly, I continue to surround myself with people who continue to help build me up, who amplify my voice, and whom I can share mutual respect and gratitude with.”