“Believe in yourself, not the people who doubt you.” 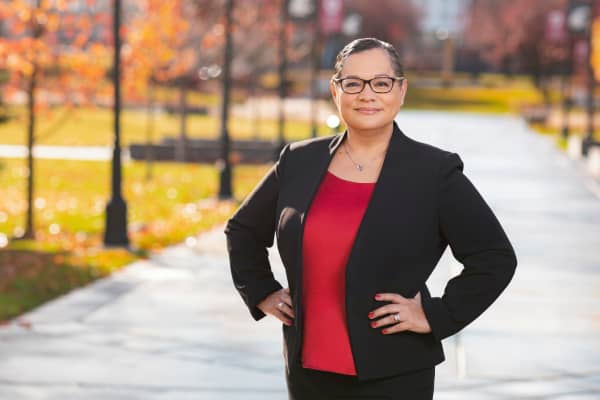 Gloria Ochoa-Bruck was the first person in her family to graduate from high school. While she aspired to become an attorney, her family couldn’t afford tuition for a four-year college or university, let alone law school. So she enrolled at a local community college instead.

Gloria was working full time and studying for her associate degree when she gave birth to her oldest son. Struggling to raise a newborn, work, and attend classes, Gloria sought advice from her school advisor. His suggestion? Change educational paths to the paralegal program and give up on her dream of becoming a lawyer.

After some thought, Gloria scheduled the appointment. However, her advisor ended up being out of the office that day and a woman named Wendy was covering his appointments. When Gloria explained the reason for her meeting, Wendy asked why she was changing programs. Gloria began to tell Wendy that she had been working toward her associate degree for three years, but she still had quite a few courses to complete and would be 27 before becoming a lawyer—plus her other advisor had recommended it.

Longer is better than never.

Gloria remained on her educational path and earned her associate degree. She then went on to earn a Bachelor of Arts in business administration, Master of Arts in criminal justice and criminology, Master of Business, and her Juris Doctor.

“I have never let anyone tell me I couldn’t do something again,” Gloria said. “If Wendy had not been there that day, I would have changed course and sold myself short.”

Gloria earned both her master’s degree in criminal justice and criminology and her online MBA from Washington State University.

“I have never let anyone tell me I couldn’t do something again. If Wendy had not been there that day, I would have changed course and sold myself short.”

Gloria began her career serving as a deputy prosecuting attorney for Benton County, Wash., then transitioned into private practice and opened her own law office focusing on State and Federal felony matters, personal injury law, and representing small business owners. Her career also includes having served as a member of the City of Spokane Mayor’s cabinet as Director of Local Government and Multi-Cultural Affairs, Chief Judge for Spokane Tribal Court, Associate Judge for Kalispel Tribal Court, and Adjunct Professor at Gonzaga University School of Law.

“Although my career pathway is not solely in business, my business degree has been an asset. I used my business education to operate my own private practice law firm for 12 years. It also prepared me to work with budgets and financial statements in government operations and (in) sitting on boards of nonprofit organizations.”

Although there were people that told her not to run because she wouldn’t win the election, in 2021 Gloria ran for Spokane Municipal Court Judge in a contested race and was elected to a 4-year term.