“You have to find something that’s the right fit for you. WSU checked all the boxes for me.” 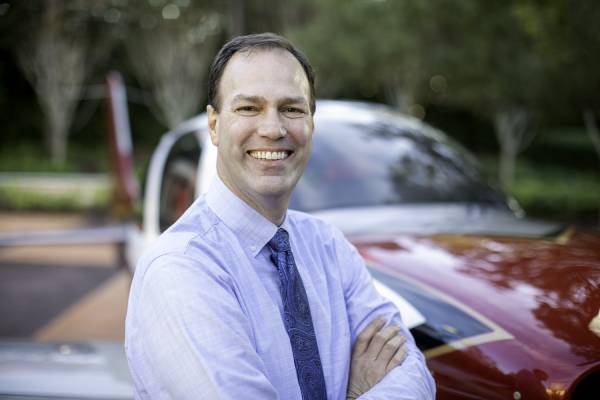 Gary Poelma has been with aircraft manufacturer Cirrus for more than 30 years and has had a hand in just about every aspect of its trajectory from homebuilt business to global corporation.

He started out helping to design two of the company’s early-model planes before going on to serve in various management and leadership roles in engineering. Poelma also worked in the production, customer service, and international business divisions before making his way back to engineering, where he is now executive director.

The idea of returning to school had been in the back of Poelma’s mind, especially as he witnessed the business changing and expanding into new markets over the years. He determined he needed to take that next step to keep growing along with the company.

“I didn’t want to be left behind,” he said. “My boss was a very strong advocate of continuing education, so he and I talked about it for a while. He took the plunge and got his MBA and kept talking about the value it was bringing for him.”

A Program with You at Its Center

Poelma had considered enrolling with another premier business school that advertised an online MBA, but he would still have to travel to campus every few weeks to satisfy the program’s residency component.

“I said, ‘You know what? That’s just not going to work for me and my family.’ I quickly settled on the fact that I needed an online-only program.”

Besides offering the convenience Poelma was seeking, WSU allows applicants with sufficient leadership experience to waive the GMAT, which was a key factor in his decision-making process.

“I’d been out of school for 25 years or so and
didn’t want to take a bunch of prerequisites and
study for the GMAT. I wanted to start taking master’s classes right away, so Washington State came to
the top of the list very quickly.”

Because of his work in the aviation industry, he was also familiar with the Carson College of Business’s namesake and former Boeing executive, Scott Carson.

Poelma initially had some reservations about not getting classroom time with his online colleagues, but these concerns were alleviated when he started taking classes and saw how the program was set up to facilitate connection between a diverse group of leaders.

“WSU works to provide interaction in all the classes,” he said. “There’s good diversity of students coming from engineering, accounting, healthcare, and finance backgrounds.”

It also helped that Poelma had a dedicated study partner in his daughter, who was also attending college at the time. The two would hold joint study sessions at their local coffee shop. 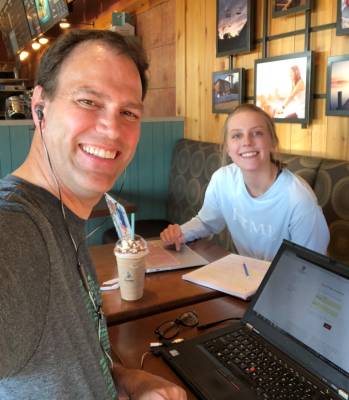 The Hows and Whys of Business

Although Poelma already had plenty of experience in business principles, what he took away from the Executive MBA program was greater strategic expertise in areas such as international business, administrative policy, and operations management.

“These topics weren’t new to me, but going many levels deeper on the hows and whys is where I really got the value. In each area, there were some little nuggets that helped round out my education and leadership skills.”

Poelma found that the capstone projects that concluded each semester provided an engaging forum for collaboration with other leaders whose experience complemented his.

“One of my teammates was a project management person, another person was supply chain, and the third was in marketing development. We had a well-rounded team,” he said. “It was great to see the strengths of different people as we went through our product development project.”

“I’m at a product company, and with my engineering background, the stuff that we did in our capstone was just fantastic,” Poelma continued. “We talked about ideas and a concept. How do you prove out, or validate, that concept through many different stages—from customers to marketing to channels and all the things that go into it?”

“It’s interesting to be exposed to what the entire cycle should look like. It makes you have better insight into what you’re doing on the product side of things.”

Leading the Way to Continued Growth

Strategy is at the heart of Washington State’s Executive MBA, and Poelma is applying that strategic thinking daily to keep his company at the forefront of aviation manufacturing.

“We want to grow, do more, and bring better and new products to our customers,” he said. “I want to be part of that planning and execution. I want to see where this whole thing is going.”

“I want to be the one leading that journey, and this degree is one of the ways to get there.”

Poelma acknowledges that it can be hard to make the time to continue your education when you’re as busy as he is. However, he advises interested applicants to approach the program with the same sense of determination that led him to accomplishing an important goal in his personal and professional development.

“Everybody who finishes the program says, ‘Man, I wish I would have done this earlier.’ There’s never a right time, so you just make it happen.”