The Rise of Women Executives 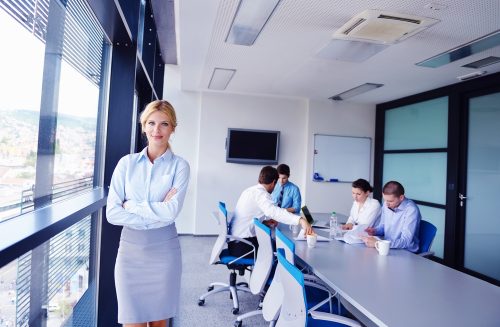 Women have entered the workforce in increasing numbers over the past several decades, climbing from 32.7 percent participation in 1948 to 56.2 percent in 2020, according to the U.S. Bureau of Labor Statistics. Consequently, more women have reached executive positions, and women-owned businesses are on the rise. However, the numbers still haven’t reached parity. According to Fortune magazine, only 44 Fortune 500 companies are helmed by women. That rate, although a record, does not reflect the current state of the workforce.

What are the barriers to women taking senior leadership roles, and how have women executives overcome those barriers? While the challenges are complex, an advanced education is one of the factors that can help better position women for access to executive roles.

Understanding the Barriers to Women in Executive Roles

Cultural biases, lack of opportunity, and lack of support are among the biggest barriers that keep female business leaders out of the C-suite. Yet this does not reflect a lack of ambition or desire to reach executive roles. In fact, before women are stopped by the “glass ceiling,” the metaphorical divider that prevents them from taking senior leadership roles, they are often tripped up by the “broken rung”—meaning they never even make it to the first step of management training.

Fewer Women Get Promoted to Manager

According to a 2021 report by McKinsey & Company, for every 100 men promoted to manager, only 86 women are promoted. Because fewer women are in the pipeline, they miss that crucial first step on the career ladder that can help elevate them to even loftier roles. This broken rung also has another impact: if fewer women become managers, then other women don’t see them as role models and mentors.

Lingering cultural biases—such as that women don’t become managers because they are less ambitious, more nurturing, or less analytical than men—may cause some companies to bypass talented leaders. The ramifications of these outdated perspectives are particularly egregious for women of color. According to McKinsey, 57 percent of senior managers in corporate America are white men, 27 percent are white women, 15 percent are men of color, and 9 percent are women of color.

Working women often take on the lion’s share of child care and household responsibilities. This was starkly illustrated during the COVID-19 pandemic. With schools and child care facilities closed due to lockdowns, millions of women had no choice but to leave work to take care of their children. According to payroll site Gusto, just over 4 percent of women workers quit their jobs in January 2022, compared to 3.4 percent of men. When women have to take on what’s known as “the second shift,” they don’t have the support they need to focus on their career ambitions.

How Are Women Reaching the Executive Level?

One way women rise to the C-suite is through their education. According to the Graduate Management Admission Council, 44 percent of applicants to Master of Business Administration (MBA) programs in 2021 were women, while 56 percent were men.

An MBA is an effective tool for advancing to a corporate leadership position. However, women interested in becoming executives may find an Executive MBA more effective than a traditional MBA. Executive MBA curriculums go beyond standard MBA coursework and are designed to teach students the intricacies of leadership at the highest level. In particular, the Washington State University (WSU) Carson College of Business offers a 100 percent online EMBA tailored to meet the needs of working professionals. The program can be completed in as few as 18 months and is best suited for individuals with years of leadership experience.

While progress is slow, the number of women executives is steadily rising. According to a report from research firm Equilar, the number of women in executive roles rose by an average rate of 6.9 percent from 2016 to 2021, up from just 3.8 percent in the five years prior. Due to this growth, women held 14 percent of executive positions (the top five most highly-paid executives) in 2021. While still low, this figure is nearly double what it was a decade earlier (8 percent).

Progress varies across industries. Some sectors, such as financial services and energy, have been slower to promote women into the C-suite than others. However, materials and industrial manufacturing and health care have shown significant gains.

Women have made many leadership gains on their own, but they shouldn’t have to do so completely unsupported. Businesses can help their female employees reach the C-suite in at least three ways:

When women executives take on the top job at corporations, they perform as well as the male executives at the same level. Some examples of women in business who have brought great success to their companies include the following.

Rosalind Brewer was named CEO of Walgreens Boots Alliance in 2021. She is considered to be one of the most influential black female CEOs in the nation. Her career includes a stint as chief operating officer and group president at Starbucks and president and CEO at Sam’s Club. She’s also served on a number of corporate boards, as well as the boards of her alma mater, Spelman College, and the Smithsonian, among others. Fortune named her one of the 50 Most Powerful Women in Business in 2021.

Thasunda Brown Duckett leads financial and retirement management services company TIAA, which has $1.3 trillion in assets under management. Prior to TIAA, Duckett was CEO of Chase Consumer Banking. She’s served on a number of corporate and philanthropic boards. Duckett is another influential and successful black female CEO.

Duke Energy is one of the largest energy holding companies in the United States. Prior to being named CEO, Good was Duke’s chief financial officer (CFO). She sits on the boards of aerospace giant Boeing, several energy and nuclear power associations, the New York City Ballet, and the Bechtler Museum of Modern Art. Under her watch, Duke Energy has invested in solar energy and focused on modernizing the power grid.

Safra Catz was named CEO of technology giant Oracle in 2014 and has sat on the company board since 2001. She was formerly president and CFO of the company. Catz has served as a director for international banking giant HSBC and on the board of the Walt Disney Company.

Women Executives Are Leading the Way

Companies and industries benefit when they draw from a diverse group of candidates to build their leadership teams. Besides ensuring that they get the largest number of qualified candidates, they also reap the rewards of innovative thinking. If you’re excited about the opportunity to become a business leader, explore Washington State University’s Online EMBA program. It may be the stepping stone to an exciting business leadership career—and an inspiration to women who follow.

4 Ways an EMBA Can Help Improve Your Leadership Skills

How to Be a Successful New CEO

Axios, “The Unpaid Labor of Working from Home”

BetterUp, “Gender Inequality in the Workplace: The Fight Against Bias”

CNBC, “These Are the Industries Where Women Are Making the Most C-Suite Progress”

Deloitte Insights, “Gender Equality, Dealt a Blow by Covid-19, Still Has Much Ground to Cover”

U.S. Bureau of Labor Statistics, “Women in the Labor Force: A Databook”