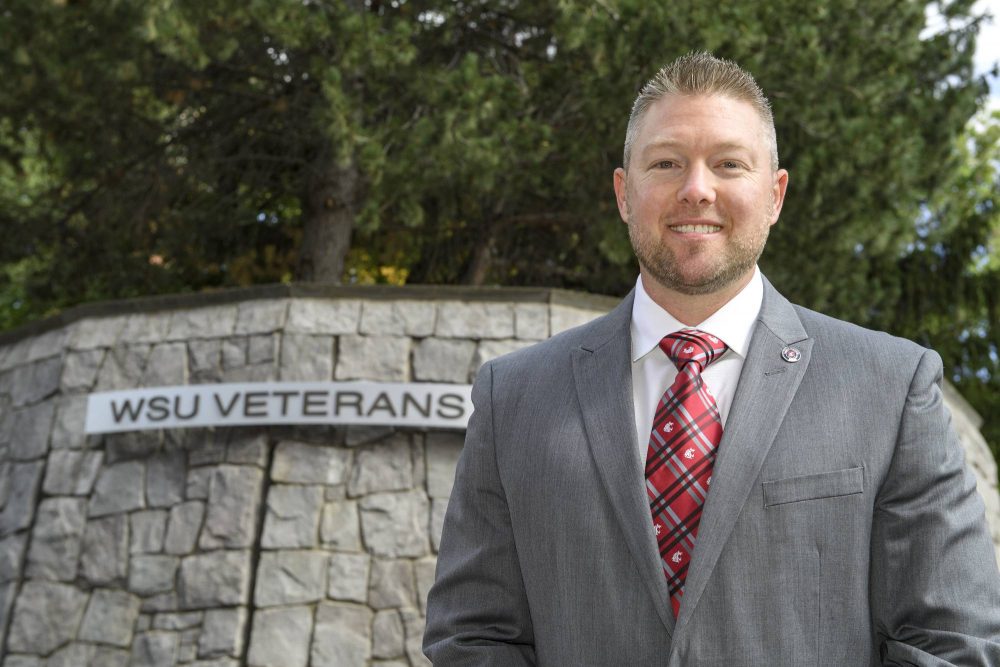 Jason Williams is no stranger to adversity.

As a former helicopter rescue swimmer for the U.S. Navy, Jason Williams thrives in challenging and uncertain situations. Williams is one of 297 student veterans on Washington State University’s Pullman campus, and he vividly recalls leaving a rewarding military career to pursue his dream of becoming an entrepreneur.

“Leaving the Navy was a tough decision but earning my business degree was always part of my master plan,” he says.

Coming from a selective military background, Williams felt more prepared, motivated, and adaptable under stress than many of his academic peers. His rescue training, for example, had an attrition rate of 65 percent. Then came math. Williams quickly realized that after nearly 10 years of service and three deployments, his math skills were a little more than rusty. Yet, it was that same military experience that enabled him to transform his fears into confidence.

“Asking for help in math was a blow to my ego,” says Williams, “but as a rescue swimmer, I learned to never give up and to be humble enough to seek help when I needed it.”

For Williams, pulling all-nighters and investing in math tutor Jordan Culp paled in comparison to battling through drown-proofing exercises at the bottom of a Navy pool. As each academic evolution gave way to success, and each success built up his confidence, Williams’ instructors became aware of his emerging role as a leader.

Director of the WSU Center for Entrepreneurial Studies Marie Mayes has grown to value William’s heightened level of professionalism and willingness to give back to those around him.

“I especially appreciate his willingness to share his life experiences and start-up knowledge with his classmates,” says Mayes. “He has a unique way of sharing his expertise so that students are open to improving.”

Williams has done more than just survive as a student in the Carson College of Business— he’s thriving. Williams is the cofounder of Eco Carbon Technology Inc., a venture launched through WSU’s Business Plan Competition that seeks to protect bee colonies from pesticide toxins. Williams has presented Eco Carbon at numerous competitions, but his favorite was being the first team in WSU history to place at the University of Washington’s Business Plan Competition in 2018 and adding $12,500 dollars to his company in the process.

“It would have been easy to tell myself I was too busy to participate in extracurricular projects,” says Williams. “But simply trying something new has opened so many doors and amazing opportunities.”

Most recently, Williams is serving as the vice president for Washington State University’s student Veteran Committee. It’s just one more way of serving his fellow students, especially those student veterans reorienting themselves to college life.

“I remember what it was like to being fresh out of the military and new to campus. Frankly, life as a full-time student with much younger peers was a bit jarring at first,” he recalls. “I could see where a unique student veteran orientation could be hugely beneficial.” Williams also acknowledges the importance of having a support system. “My wife, Ashley has been so supportive during this entire journey,” says Williams, “providing me a solid foundation of love and support and always giving me the courage to keep moving forward.”

With just months left until graduation, Williams isn’t slowing down a bit. He’s pursuing a career in finance and portfolio management and has been accepted to the Carson College of Business’ nationally ranked Online MBA program.  With ten years of military leadership and his recent successful ventures into entrepreneurship, Williams sees an MBA to take his game to the next level. “This program will give me an edge to take a larger view of business and develop and execute strategically,” he says.

When asked what advice he’d give to fellow students, Williams is quick to reply.  “Work hard, ask for help, and say ‘yes’ to opportunities. Mediocracy is for cowards.”