Richard Branson, Virgin America and the Art of Taking Chances

Richard Branson is one of the most well-known entrepreneurs in the world. In fact, he’s credited with developing over 100 brands and having nearly 400 companies in his empire. However, you don’t reach that status by playing it safe. Branson admits that taking chances is what got him to this point in life.

Below are some risks and chances taken by Branson.

Don’t Be Afraid to Make Bets 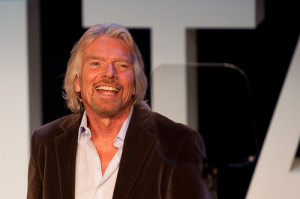 Image via Flickr by Gulltaggen One of Branson’s earliest memories is when he was four or five years old, and his aunt bet him ten shillings that he couldn’t learn to swim by the end of his family vacation. On the way home, Branson saw a river and persuaded his father to pull over so he could jump in. After some floundering, he figured out how to swim and earned himself some money.

Later in life, he took that same attitude when he bet friend and competitor Tony Fernandes of AirAsia that the owner of the Formula One team who came in at the lowest standing would work as cabin crew on the other’s airline. While
Branson ultimately lost the bet, he says nothing was really lost because the publicity helped both airlines, and the charity flight raised $300,000 for sick children.

Plan for the Worst-Case Scenario

Branson believes the best advice he received was that while he should be willing to take risks, he should also always have a plan for the worst-case scenario. One example of this was when he was planning the launch of Virgin Atlantic. Virgin Records was at the height of its success, but didn’t really have the money to start an airline. He was able to negotiate with Boeing for airplanes to show his board that, even with the worst-case scenario of failing, the company would only lose six months of profit.

Don’t Be Afraid of Change

One area where Branson and the Virgin brand decided to challenge the status quo is also known as one of his most popular successes. In Britain, Virgin Money is a bank where the lobby looks more like a living room. There is comfortable seating and tables for magazines instead of long lines and teller windows. In this case, Branson challenged the norm and created something different.

While Branson freely admits he’s suffered from dyslexia his entire life and struggled in school, he shares the same quality that many MBA students have: he knows how to learn from his failures. For example, Branson had to spend one night
in jail when he was charged with tax evasion during a time when his Virgin record stores were struggling with cash flow. After that, he vowed he would never do any business deal that embarrassed him, and he would never do anything that caused him to go to prison. Today, Branson says if your first business venture wasn’t a success, you can officially join the entrepreneur club.

Throughout the years, Richard Branson has shown that he’s not afraid to take chances. This attitude has helped him build a highly successful and well-known company.