Five Women in Business Who Are Inspiring Change

Although many people have expounded on the positive reasons to hire women and are advocating for more women to work in business, the journey to having an equal number of women and men working in business is still a long one. The following five women work in different industries, but they are all doing amazing things to pave the way for more women, and to stand up for gender equality.

After a viral TED Talk and the publication of her book Lean In, Sheryl Sandberg, Facebook’s COO, has been in the headlines a considerable amount recently. Despite a certain amount of backlash for some of her concepts, Sandberg has done considerable work to inspire change in the business world and create a more welcoming environment for businesswomen everywhere, including by encouraging men to “lean in” as well as women.

The entertainment industry is still populated by more male executives than female, but Shonda Rhimes has made a huge career creating and writing shows like Grey’s Anatomy and Scandal that bring in hundreds of millions of dollars a year for ABC. Rhimes doesn’t shy away from writing about controversial subjects, and her shows are populated with varied casts of dynamic women.

As a powerful force in the tech scene, Kara Swisher is not afraid to call out the huge gender and race gaps that exist in Silicon Valley and the rest of the world’s technology industries. She’s a fearless investigative journalist who has criticized giants like Google, calling out tech companies for irresponsible, sexist, and racist behaviors. Both the technology industry and the tech news industry can learn a few things from her desire for fairness and equality.

After obtaining a degree in engineering from Stanford, Debbie Sterling used her education to help other young girls interested in STEM (Science, Technology, Engineering, and Math) subjects. Her business, known as GoldieBlox, provides toys and a narrative meant to inspire an interest in engineering in young girls and narrow the abysmal gap between men and women in the engineering field. She may not have a business degree, but she recognized that the market for girls’ toys could use some variety, and provided it in spades. 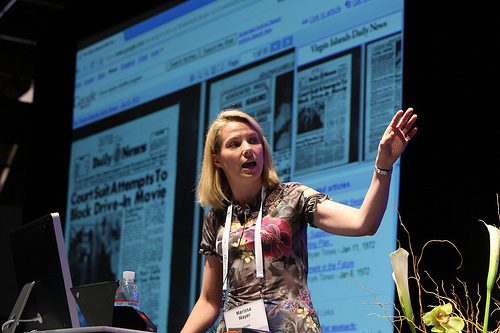 The current President and CEO of Yahoo made headlines for giving employees a longer maternity leave, and continues to make headlines as stock prices have soared since she took the reins. Not only is Mayer’s presence and success at Yahoo making it easier for other women to follow in her footsteps, she’s also fought for more transparency in the NSA, so that internet users know what data is being collected and how that data gets used.

Across different industries, these women are just a few who are doing great things, both for their companies and for gender equality. From CEOs of major companies to journalists who are unafraid to tell the truth, women in business are doing truly amazing things to inspire the changes that need to happen.